Every MagnaValve® is flow-tested and calibrated to the customer’s required media type and size before it’s shipped. In the past, depending on the required flow rate of the MagnaValve, it was tested on a test stand with a hopper or an elevator. In either case, an Electronics Inc. (EI) technician was responsible for pouring the media into the hopper or elevator, monitoring the process and documenting the results. A flow test with an elevator could take up to four hours if the elevator had to be cleaned because the next MagnaValve required a different media.

There’s Got To Be a Better Way

EI has enjoyed steady growth in its MagnaValve product line, but they were coming up on a problem. Most wheel-blast machine MagnaValves required a test stand with an elevator due to their high flow rates. MagnaValves for air-blast machines could be calibrated on a test stand with a hopper but since a customer orders multiple units for one machine, prepping air-blast machine MagnaValves for delivery was just as time consuming as prepping wheel-blast machine valves. EI technicians were spending too much time handling media and monitoring the test stands, and there was always the risk of media contamination in the elevator. In addition, the elevator was noisy and distracting to workers in the nearby Almen strip testing station. Most importantly, EI wanted to eliminate the safety hazards associated with lifting media and, even though EI maintains an extremely clean plant floor, there was always the chance for media spillage that could result in falls. A material-handling robot became the obvious solution.

“Shotzie,” so named in an employee contest, was installed in early 2015. The industrial robot navigates in

the center of a circular testing station with shelves for containers of media and two testing platforms with hoppers—one for air-blast machine valves, one for wheel-blast machine valves. The hoppers can hold 100 to 700 pounds of media. Tests for both types of valves can run at the same time and the test platforms allow easy access to the MagnaValves so they can be changed quickly. 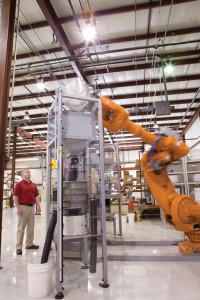 Shotzie, the EI industrial robot, lifts a bucket of media up to a hopper while Bryan Chevrie, an EI engineer, watches.

During a test, the robot picks the correct media and pours it into the hopper. If the test requires a large volume of media, Shotzie picks up the media bucket from under the test platform and pours it back into the hopper. A process that once took up to four hours is now completed in 20 minutes with no risk of injury to employees or chance of media contamination.

The Advantages of a PLC-Driven Robot

Because it is PLC driven, Shotzie has additional advantages such as common programming controls, software interfaces, backup and restore methods, and program documentation. EI’s engineering team wrote the operating procedure and they didn’t have to learn a robot programming language to do it. Technicians program the test and then go back to other tasks. Every MagnaValve’s test results are saved and stored. The system has one control panel with HMI (Human Machine Interface) and AC-24 and FC-24 controllers.

The Benefits to the Customer
“We didn’t want to get to the point where we couldn’t keep up with demand or have to sacrifice quality,” said Tom Brickley, Vice President of Electronics Inc. “Now we can calibrate a valve and get it back to a customer in 24 hours upon request.”

Since Shotzie has come on board, EI is looking forward to increasing productivity and ramping up its research and development of new MagnaValves.